An intuitive solution for the flat terrain building problem

I’ve rewatched the Devblog #25. There he mentioned, that the terrain needs to be flat for the buildings to be built. And because of that he needed to change the terrain-generation. It is certainly an approach you can take, but I’ve just remembered a better one. Does anyone know “Life is Feudal Forest Village”? There they also had the same problem.
If the people there build a house it has three steps.

I think this approach would fit this game very well, since basically every step is already implemented. And that way you don’t need to be depended on good terrain generation.

Yes that’s a good idea, especially if the result of terrain generation ensuring maximum build area would inadvertently lead to very flat, boring and unvaried world terrain as a whole. It might even be an interesting mechanic to have something like scaffolding, which would make the terrain flat but also cost extra resources. Barring that, one could have both scaffolding and terrain manipulation, but have the more resource intensive scaffolding be much faster to built, as opposed to digging a pit or building up a mound of earth

It might even be an interesting mechanic to have something like scaffolding, which would make the terrain flat but also cost extra resources. 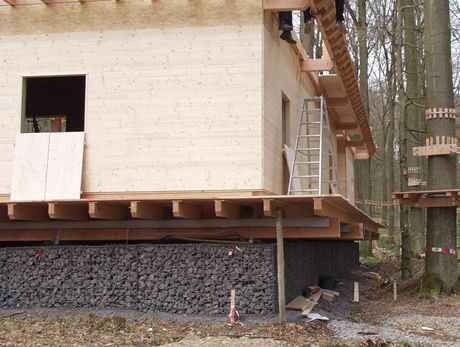 And by the way the number of houses built on stilts is way underestimated. Even in primitive cultures. And sometimes the stilts are just a few stones to keep the house dry.

At a hiking trip in Switzerland I once saw a funny bunch of houses that were quite old. They also had stilts on them, but in the middle of the house. 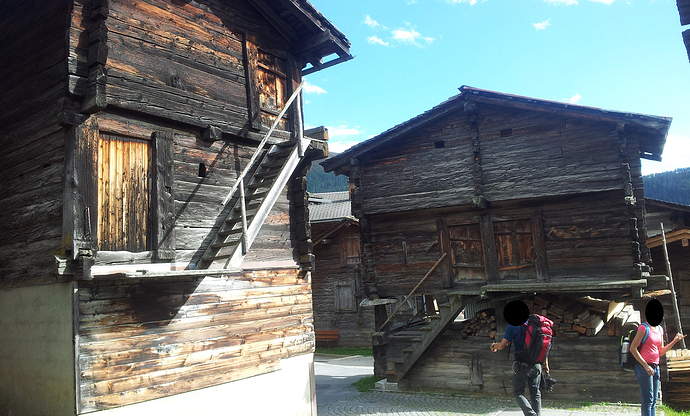 Ah yes, that’s exactly what I had in mind, thank you! That’s a wonderful picture of what I was trying to explain. Fromthere the material could be any resource in the game, maybe with different health or build speed buffs associated, or of course cost and material availability

Yes i think this would help a lot. I also think that you should be able to build on uneven terrain using pillars and stilts but there will be pros and cons. Pros: quicker to build, looks cool:sunglasses: and it helps the terrain problem by not having to make the world more flat. Cons: more resources for the supports, if not built properly (if built by a low level builder) the supports could fail and the building could collapse, and eventually when conflict is added the supports would be an easy target.

I also think they would be usefule to build on water.