Worlds are huge. I’d like it if there was some sort of easy-access ‘waypoints’ you could make to sort of skip your view to a certain area, in case you’ve lost it.
Basically, you set a waypoint at your little village, then you head off to look for a good place for a quarry, and then if you can’t find your way back to your village, you just hit a button and return to your village!

Even if Dave doesn’t implement this in game, I’m willing to bet this will be incredibly simple to set up with a mod

There will definitely be some kind of quick travel system, as it would take actual real world weeks of holding down W for you to get around the world otherwise! I’ve got a few vague ideas, I like the idea of beacons that you can travel between as long as you have a real world line of sight to each one. How such magical beacons fit into this primitive world is still ¯\(ツ)/¯

I mean, blockheads had magical portals and at least started out primitive. Wouldn’t be much different for this game. 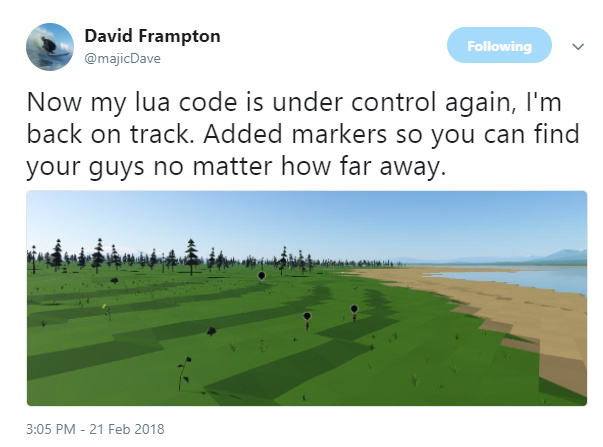 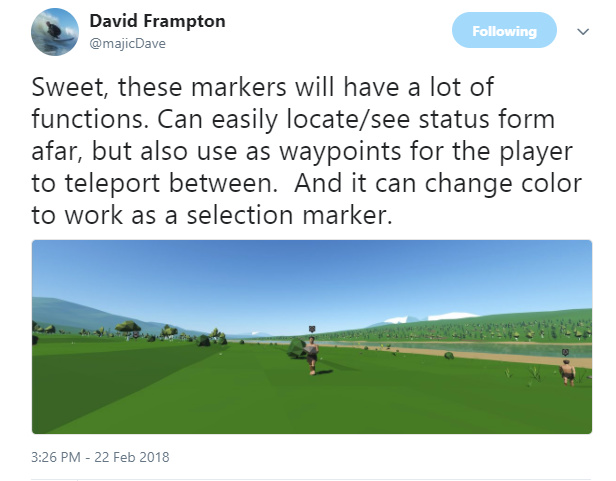 I like magic in games, or majic as the case may be. It need not be a fantasy context. Any technology so advanced that we don’t understand it is magic. Immersion is a requirement of a good game, so suspension of disbelieve is a given anyway

Looking back over this, the idea of waypoints isn’t bad. But a waypoint is merely a marker.
These are used quite effectively in Entropia. You can’t teleport to them but you can see where they are in relation to yourself and walk/run to them.
They use a few different kinds of markers and they all show up on the compass so you can see their relative locations.
Come to think of it, Transcendence does nearly the same thing but in that game they only show up depending on the scenario.

Another consideration would be the multiplayer aspect.
How would a player use these markers?
Are the markers only visible by the player who put them there? Maybe shared markers?
How many markers might there be? At some point the markers would be overwhelming. (Still not sure how big/complicated this game might get. In Total Annihilation the max unit count was 500. Of course that’s pretty old now but depending on the system…)
For the design side you might look at ways someone might use this to slow/crash the game.

I know it is an old topic. But I just had a thought that I wanted to write down.

As far as I know the player is an entity in this world similar to the spectater-mode in Minecraft, but with a bit more interaction-power. Because of that form, it is not really necessary to make a magic beacon excuse or something. If you do fast travel, you don’t really move objects of this world.

But now I’m coming to the thing I wanted to write in the first place. I would like it, if you had some kind of waypoints you can set for the player to teleport to. And they can not only be placed on places, like the settlement, but also at moving objects like boats, or special entities. It is not really necessary to follow a specific chicken, for example, but if you have several villages, and there is a caravan trading between them, it might be helpful, if you can teleport to them. Additionally, if you have an exploring ship, in the search for a new continent, you might want to know where it is.
And if you have several waypoints, it might be helpful to have stuff like a map and a list, where you can show and hide stuff on.

For me, this sapiens-specific knowledge sounds fun. But if it actually was implemented, it might not be fun anymore. But one thing I do think is necessary is, that you can set waypoints to moving entities like boats, scouts and caravans.