Possible new name for Ambience that Dave tweeted about and registered a domain for! 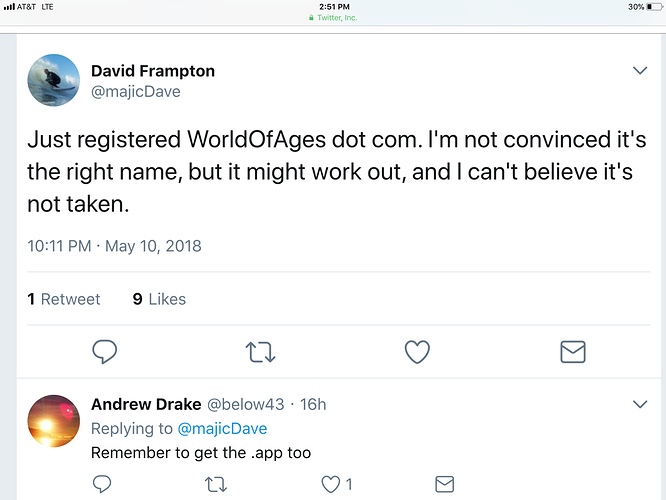 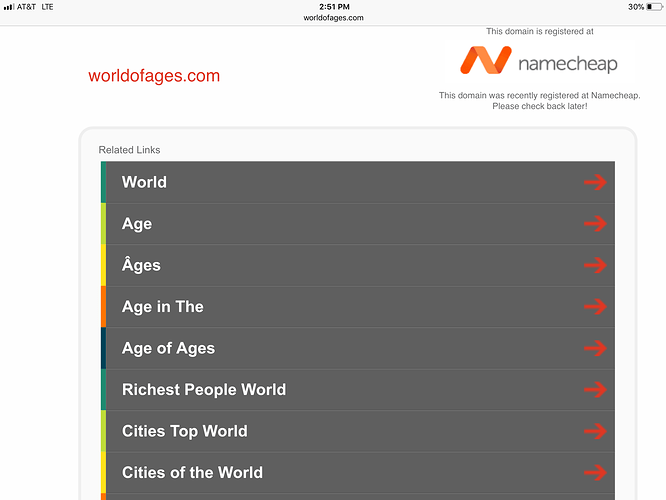 Possible new name for Ambience that Dave tweeted about and registered a domain for!

What are your thoughts, everyone?

Could you link to tweets instead of (or as well as) taking a screenshot, please?

I thought of World Of Ages a few weeks ago, and it’s sort of growing on me. I’ll wait a long while yet before deciding, but thought I’d better snap up that domain name while it’s available.

What do you guys think?

I like it. It’s not something that would come to mind immediately, and I’m also surprised to hear it’s not taken. I wouldn’t say it knocked my socks off, but it’s a good name.

I linked it in the OP.

@majicDave I do like the name, it sounds very epic.

World Of Ages named won!!! I hope this is the final name you will set Dave

I really like it - it highlights the skill progression & evolution of your cavemen.

Actually, I’m not a fan of the name. Any name in the format “X of Y” makes it sound like one of those generic low-quality war-focused mobile games like “Clash of Clans” or “Empire of Kings” or “Reign of Fire” or “Blood of War” or “Crown of Fire” or “Blade of Vengeance”.

Now, I do admit that I made up almost all of those names, but they sound pretty convincing, don’t they? Clash of Clans aside, you have to admit that the “X of Y” name formula makes a game sound like the gameplay is entirely focused on war and battles, and World of Ages is no different. When I hear World of Ages, I have a mental image of a game where one plays as a war commander, defeating other players and their armies in order to advance one’s own army. The “Ages” part of the name only adds to the effect, and hints at the possibility of technology not only becoming more powerful but also more modern as one progresses. Rocks to spears to swords to guns, that sort of thing.

Now at this point in time, Ambience does not seem like the sort of game that would be focused on war. It has the potential of course, and this early in development anything could happen, but I really do not expect that will be the direction that the game or its community will go in.

World of Ages is a great name, but it couldn’t be more unfitting for Ambience.

I think tools will become more modern in the game, kind of similar to Blockheads.

Thanks all for the feedback on the name. I’m kind of surprised by such a positive reaction, that’s made me like it more

@cloudrac3r your comments are exactly what is holding me back, you summed it up really well. I nearly dismissed the name right at the beginning due to the associations it would have with other games.

However I don’t think it rules it out entirely, as with all names, once you attach it to something new, it quickly loses the baggage it had before. The fact that it is quite different from all of those mobile war games probably helps in that regard. And those associations are probably less of a problem for PC gamers than mobile gamers.

My thinking is that the game starts in the Stone Age, progresses through the Bronze Age and Iron Age, on to the Industrial/Manufacturing Age and may get some way into the Modern/Information Ages. It’s literally a game where the main point is to progress the world through the ages, and so World Of Ages suits this game very well, probably better than anything else I have come up with.

@Brer-Rabbit I changed the title of the thread as this whole thing has turned out to be about the name, so it probably fits better this way

Sure Dave, can we post your Ambience tweets without Ambience photos in screenshots in that case?

hmmm, if you see a tweet about something you think is worth talking about here, it might be best to just make a new thread about it each time?

I’m in agreement with @cloudrac3r
There are so many games out there with similar names, and i feel like this one would easily become overlooked because of it. It sounds rather bland to me. I’m still liking the name Ambience more than all of the other ideas.

I actually like the name because 1. it sounds familiar (which in my opinion is a good thing), 2. it’s easy to remember, 3. it seems to sum up the progressive nature of the game and 4. it’s a name with some gravitas.
I honestly can’t believe that it hasn’t already been taken.

I agree with that it’s just because there’s a lot of games they might think this game it’s just copied from another game as I can see Dave like doing evolutions of caveman here I don’t know what else his doing don’t you know coding is hard after that they’ll just judge you this game it was copied and I can see this game, not about clans or fighting others like CoC strategy game is this strategy game as I see it’s simulator and creative fun family game with making friends online

I love the new name because it sounds more fitting to the game theme than Ambience. But like the others said, it sounds similar to many other games, and doesn’t exactly sound unique, even though it is, amazingly.
Could there be any way to make the name unique, yet fitting?