You are a God in the game [story suggestion]

I think it would be brilliant to have the game’s story line be based on you actually being a god, that just finished creating the world and its first planet. Now it is up to you to guide the Sapiens you created to evolve into their ultimate state. However, not everything comes for free, and wars and other conflicts will inevitably happen, as even gods make mistakes (look at me haha). You, as the god, cannot directly interfere with these conflicts, but you could send signs down to the planet such as miracles, prophets, half gods, etc. and make them build temples to worhip you.
The story could adapt for multiplayer, where every user can choose to be a certain kind of god (god of war, of harmony, of wine, … you know the deal) and therefore get certain perks.

I don’t think Dave goes for that and I think it’s very difficult to implement. Your idea goes deep into the storytelling. And combining storytelling, an openworld and the actions of a player is not easy. I only know one game where this is achieved (though I never played it myself). It’s called dwarf fortress.

It’s going to be god-gameish, but not entirely, as you won’t have any kind of presence in the game, or any direct interface with the environment, and the Sapiens won’t be aware of you.

Wasn’t there an image of them looking up at the player?

Quite possibly. If you place the camera where they are looking that’s what you get.

I’m guessing Wumbo is referring to this: 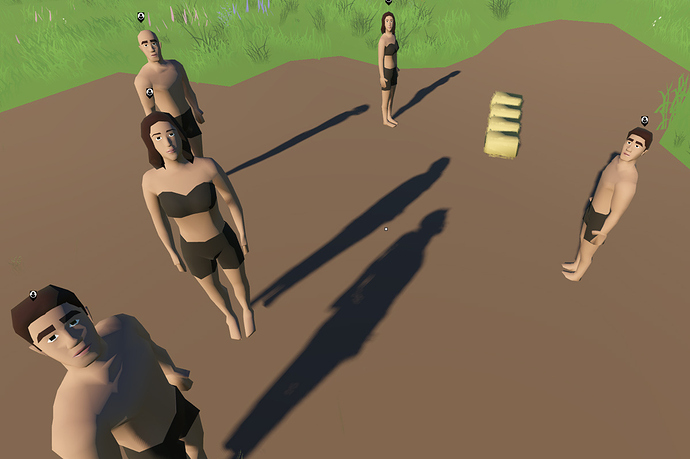 This was just a test when Dave was working on limiting how far Sapiens could turn their heads. It is not indicative of actual gameplay.

I think he should ask his forums to make a story or at least vote for one. I don’t think he needs to do the work himself.

the Sapiens won’t be aware of you

What’s the way of rationalizing that with the player giving tasks? Are we sort of placing an idea in their heads of something that would be good for them to go do without them understanding that it wasn’t really “their idea”?

When it comes to multiplayer would that mean that every player is a god, and the gods are batteling each other with the Sapiens? That concept would be quite controversial if that’s what you mean.

I assume you mean legend stuff that give some background on how the world begun to exist. I think it’s about as necessary to sapiens as it is to Minecraft or Banished.

And what @Scartlex wanted to have is not a backgroundstory but an ongoing story that get’s build while the game is played. This is not something you can vote on. And it is also difficult to implement decently.

Why does it need rationalising? We don’t rationalise it in Blockheads

@Euschi: Only to those who were gaming back in the 90s and early 00s, maybe. God games are not new. Anyway, this isn’t a god game. It has some characteristics of one, as Blockheads does, in that you don’t interact with the environment directly. You interface with your PCs.